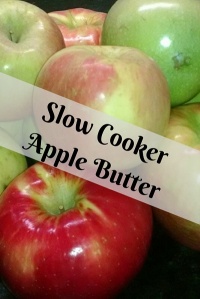 As a young girl, I remember spending hours with my mother learning how to can and freeze from the garden.   One of these memories revolves around apple butter. Father would bring home bushels of apples – yes, bushels – which we would then turn into applesauce, apple pie filling…..and apple butter.

Eating apple butter was one of my favorite pastimes. Making apple butter conjures memories of standing and stirring – continuously – a huge pot of apples for what seemed like hours.  This, of course, came after peeling, coring, and slicing apples into a huge bucket filled with salt water. I still have my mother’s apple slicer/peeler/corer.  She would attach that machine to a counter top, and we spent the next few hours with our hands immersed in salt water and apples. The concept was great: this machine peeled (mostly) and cored (mostly) and sliced (mostly), saving us time 🙂

After seeing apple butter in the grocery store, I was lured into making my own, using the modern convenience of a slow cooker.   I still had to peel, core, and slice the apples, but I did not have bushels of apples facing me… only 6 pounds….and 6 pounds is actually doable!

Apple butter should not be relegated to being used only on wholegrain toast or English muffins. Try it on pancakes, waffles, oatmeal……or try it as a dip with fresh veggies!

Best I can tell, this recipe should yield 4-5 pints, but I confess we taste-tested – often – during the day while it was cooking….and even after it had finished cooking.

Also, mix up the variety of apples. I spoke with a couple who still makes apple butter in a huge  – I mean HUGE – cauldron with a wooden paddle to stir constantly while cooking over a wood fire. They advised using half tart and half sweet apples, at least two varieties per batch. In this first batch I used approximately 2 lbs of Honey Crisp, 2 lbs of Granny Smith, and 2 lbs of Fuji apples.

This recipe can cook all night, waking the household to aroma of apple butter.  I made this during the day which is why we were able to snack on it throughout the day, reducing the final amount of apple butter produced.

I have lived in a Victorian-era house, spent several years living on a boat, and now live at the top of a mountain. Throughout his all, I have been a coffee snob, a whole foods snob, and an instructional designer. View all posts by mduggan10

One thought on “Slow-cooker apple butter”

Plant-based eating follows our journey into becoming plant-based eaters (differs from vegan) as we share recipes, research and stories along our path.